I loved this kit the moment I laid eyes on it. I saw two or three versions of Bar Mills' Shipyard Brewery as built by modellers at the railroad line forum group. Before long this craftsman kit was on my workbench and ready to be assembled! 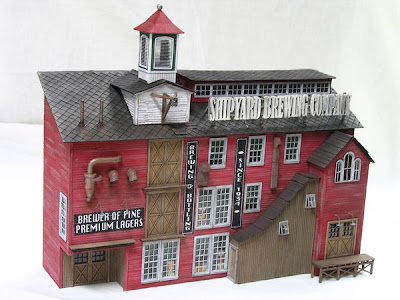 I chose to recreate the structure in the same colours as indicated on the box and in the brochures. My friend, Kaz, usually works his modelling this way and he says that you never can go wrong with this approach. While I typically chosoe my own paint and weathering colours, I had to agree with Kaz on this kit! 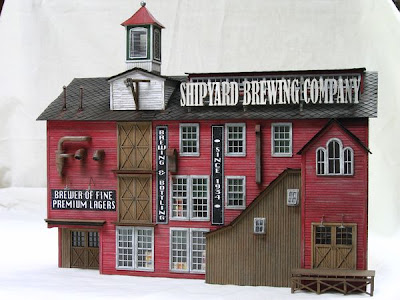 As you can see, the front elevation of the building offers interesting nooks and crannies. My single concern with the structure was that the loading ramp was too small for even a single 40' boxcar to load and unload, so I made some alterations and additions to the kit which you will see in some of the later images. 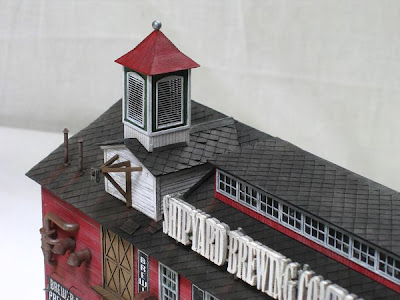 I love the diamond shingle roofing. I painted mine black and ran a series of lighter grey chalks over top to get the effect you see above. Rust running downward below some vents adds character. So does the lovely cupola that came with the kit! The signage is typical of the high quality signs offered through Bar Mills and was included in the package. 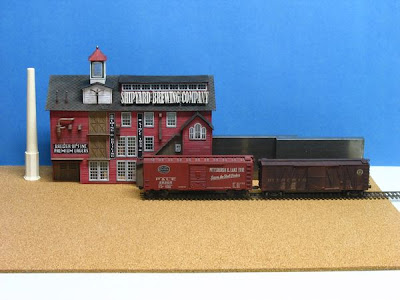 My buddy, Kaz, was over one evening and we began discussing how we could make this a true railroad structure. He brought me the chimney stack which you see to the left and I placed a couple of my heavier weights to the right in an attempt to 'visualize' just how much further work and materials would be necessary in order to add an addition to the structure. I wanted two freightcars to be able to work the industry at a time in order to offer heightened switching possibilities. 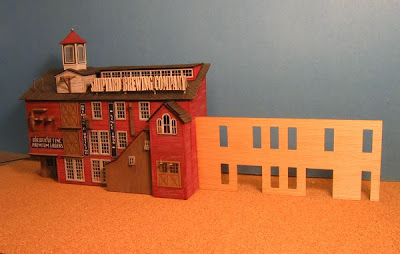 Kaz had informed me of that fact that Bar Mills offered what they called the "1-Kit" which is basically a series of modular wall sections in clapboard siding. On the back of these sections are marked areas for a variety of window and door sizes and arrangements. Four wall sections come in a pack with tons of laser cut windows and door offerings. Above you see my start to the addition which I chose to recess back from the wall section on the original structure. This offered greater visual appeal. 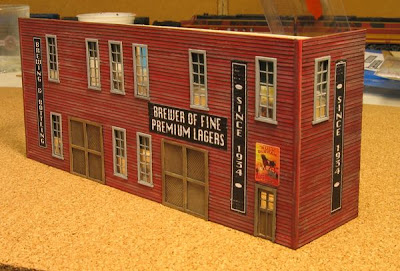 Here is the addition. I added similar signage as found on the original. My biggest challenge was matching my weathering techniques seeing as this build occurred six months after the original. Matching the paint was fine...a simple matter of using the same red colour - the weathering - now there was the challenge! 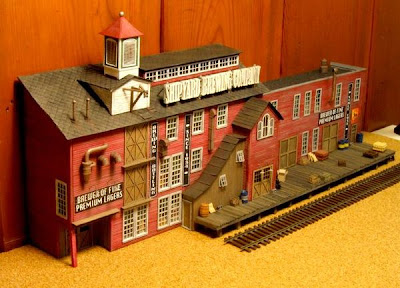 Here is a three-quarter view of the finished structure. I scratchbuilt a loading dock which followed the contours of the structure. It is long enough to accomodate two 40' boxcars which was my initial desire. Because the addition is recessed, the loading area is substantially wider. This offers me more opportunity to add further detailing to the scene! 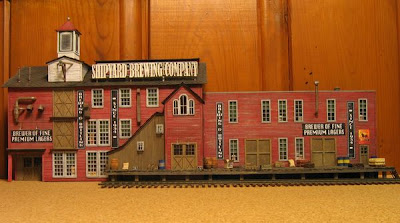 Front view of the entire facility. I felt really happy with my marriage of the colours from the original through to the addition. Another friend indicated that it wouldn't really matter had they been off a little, as the addition could have been place on the real building many years later. I wanted it to look like this was the initial stuctural plans from the 'get go'. 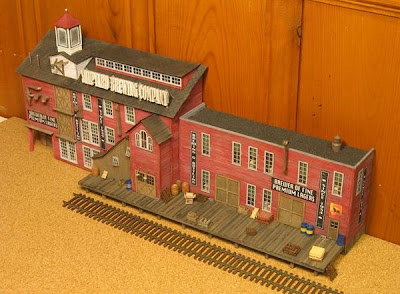 Thanks, Mike Hamer - Ottawa, Ontario, Canada
Posted by Mike Hamer at 6:31 AM